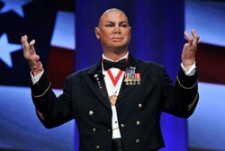 "Halos for Heroes", sponsored by The Patriot Project and Magneceutical Health have launched their first crowdsourcing campaign and reached nearly 70% of their goal with just three weeks remaining. Many decorated Veterans are endorsing the effort to bring Magnetic Resonance Therapy to Military (in their homes) at http://HalosForHeroes.info

March 3, 2015 (Newswire.com) - Staff Sgt Shilo Harris (ret), who was nearly killed in an IED explosion in Iraq, tells you about the pain and struggle he went through while recovering. He received some free Chiropractic care from the Patriot Project and through that contact, was introduced to Magnetic Resonance Therapy.

This is what Harris said in a recent interview,
"Since beginning treatment using the Magnesphere, I have clarity, I feel more calm, I'm sleeping better, and many other health issues have improved." Harris continued, "Dr. Novelli, Carol Ann Malizia, and Allen Braswell have changed my life for the better. Dr. Novelli and the chiropractic profession have given me my life back."

Sgt Harris, is not the only veteran to praise the therapy and the campaign to provide Magnesphere treatments and Halos (home unit) to wounded military at no charge. Medal of Honor recipient Leroy Petry, retired U.S. Army Master Sargent, when he reclined in the Magnesphere, he fell asleep in minutes.

"I felt so relaxed. It felt great," Petry said.

Also present during that interview was Donald "Doc" Ballard, a retired colonel in the Kansas National Guard and a Medal of Honor recipient as well.

"We feel vets paid the price," and everything should be done to improve their quality of life, said Ballard, a member of the Patriot Project's board of directors.

Allen Braswell, President of Magneceutical Health, is grateful that this campaign to provide this Alternative Health treatment to Wounded Military has been so well received.

Braswell stated, "We've had a great start, but we really want to finish Strong. If everyone who reads this pledged $5, we'd complete this campaign and meet our goal."

He continued, "Please go to the site and leave a donation today so that we can place as many of these devices in Veterans homes as possible."

To donate go to HalosForHeroes.info

About Magneceutical Health:www.Magneceutical.com
Led by Allen Braswell, (and its Founder, Dr. Jerry Jacobson) Magneceutical Health™ is a company in the complementary and alternative medicine market that is dedicated to helping people improve their health and wellness by enhancing the "relaxation response" through the use of natural and holistic magnetic fields, without drugs, shots, or surgery. We want to find solutions to help people manage the stress, strains, and pains, of life.